Many people use clock speed as a measure of a computer’s total computing power, but that term can be very misleading for a couple of reasons.
The computer keeps all its devices synchronized by using its clock. This isn’t a regular clock—it’s a “clock in a chip,” which keeps highly accurate time and ticks much more rapidly than a wall clock. The faster the computer’s clock ticks, the more quickly the device can move on to a new task. The central processing unit  needs a certain number of clock ticks to  execute each of its instructions. Therefore, the faster the clock ticks (that is, the “clock speed”), the more instructions the CPU can execute per second.
However, that’s not the end of the story. Different processors use different instruction sets, each of which can require a different number of ticks. That means different kinds of processors may execute different numbers of instructions per second, even if they have the same clock speed. You can use clock rate to compare two of the same kinds of processor (for example, a 2.93-gigahertz (GHz) Intel Pentium 4 and a 3.0-GHz Intel Pentium 4) but not as an accurate comparison between two processors of different types (for example, a 3.0-GHz Intel Pentium 4 and a 3.0-GHz AMD Athlon II).
Even if you could fgure out which processor executes more instructions per second, that figure alone doesn’t necessarily tell you which computer will be faster for your program. Many programs - most, in fact—are limited by factors other than sheer processor speed, including amount and speed of memory, disk space, network speed, graphics or floating-point processor speeds, and bus speed.

Many modern computers have multiple processors or multiple cores (execution areas within a processor), so they can perform more than one task at the same time. Whether the computer gets a significant beneft from multiple cores depends on whether the tasks it is performing can be easily split into separate pieces—and whether the program was written to take advantage of multi-core hardware. Many programs are limited by disk drive speed. Disk drives spin at anywhere from 3,000 RPM to 15,000 RPM (speeds between 4,200 RPM and 7,200 RPM are most typical), so the time it takes to read and write data can vary dramatically.

To get an idea of how well the program will run ahead of time, focus on the system’s overall performance, running a wide variety of tests rather than looking just at clock speed. To look at one set of tests in the most recent versions of Microsoft Windows, open the computer’s Start menu, right-click the Computer entry, and select Properties to see the basic information display shown in Figure: 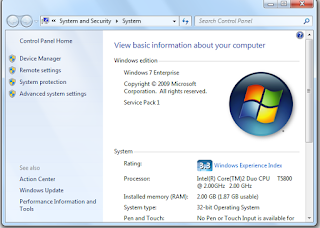 To get more detail, click the Windows Experience Index link to see the display shown in Figure below. This display shows performance scores for several different system features. 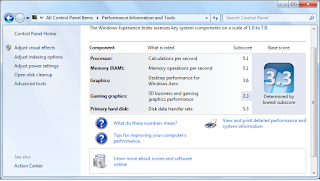 By given figure, we can see that the graphics scores are the lowest, so this system may not give the best performance for high-end graphics programs, such as three-dimensional games. But the processor, RAM, and disk scores are higher, so this computer may be just fine for applications that are not graphics-intensive.The Windows Experience Index still doesn’t consider your program’s particular needs. For  example, it doesn’t know what kinds of instructions your program will perform the most (such as integer calculations, foating-point calculations, string operations, and so on) and it doesn’t consider network bandwidth, but at least it provides a reasonably consistent value that can help you compare different systems.

Email ThisBlogThis!Share to TwitterShare to FacebookShare to Pinterest
Labels: Performace