Few days back I downloaded Update 1 of Visual Studio 2015 using VS2015 Extensions. It ran quickly but in the end it reported that .Net Framework 4.6.1 RC had not been installed. On restart and installation, it was successfully installed.

But when I tried to open and run my already created ASP.NET application, I landed up with another issue. Visual Studio 2015 was not able to launch IIS Express. This was not an end.
I noticed another strange thing. Although my installation was successful, Extension's dialog was still showing that Update 1 is available. Now I was left with only one option – uninstall and reinstall Visual Studio 2015.
So, I went to control panel and selected Visual Studio Enterprise. As soon as I clicked on that, a notification popped up: 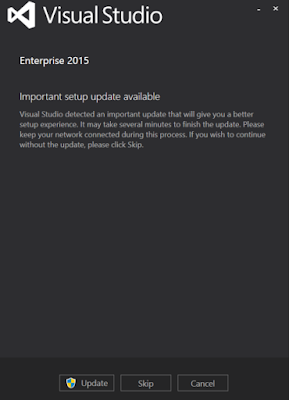 I clicked on Update and noticed that check box provided for VS 2015 Update 1 was still unchecked in the newly opened window as shown below: 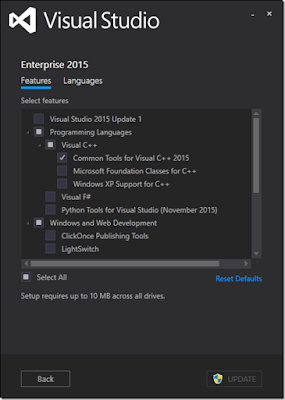 Once update is completed, all my things are in place.

If you don’t want to suffer like me then my recommendation is to do update directly from Control Panel, rather than doing it using VS2015.1.exe. Hope you enjoyed troubleshooting.
Posted by Shweta Jain at 2:57 AM

Email ThisBlogThis!Share to TwitterShare to FacebookShare to Pinterest
Labels: VS2015