This video explains the basics of NER (Named Entity Recognition) - PII (Personal Identifiable Information) and how it can be used to redact the sensitive/confidential information before passing it to next stage. It also includes code walk through and the Azure Text Analytics instance creation.

Posted by Shweta Jain at 3:00 PM No comments:

This video explains about how to make a POST API call to PII to extract redacted text information using Postman.

Posted by Shweta Jain at 8:53 PM No comments:

This video talks about what is the custom translator along with it's need. It also explains, how to create a completely customized language translator model with personalized training data and how to deploy the model in multiple Azure regions. For validating the model, C# console application was created.

Posted by Shweta Jain at 6:04 PM No comments:

Translate Document from One Language To Another - Azure Cognitive Services

In this article, I’m going to write about another interesting Azure-based service named Translator, which falls under the umbrella of Azure Cognitive Services. This service helps us to translate documents from one language to another and at the same time, it retains the formatting and the structure of the source document. So, let’s say, if any text in the source document is in italics, then the newly translated document, will also have the text in italics.

Let’s have a look at a few of the key features, of the Translator service,

To perform this entire translation process, here are the major steps, one needs to take care of:

The first step is to login into the Azure portal and creates an instance of the Translator service.

Clicking on Create will open up a new page, furnish all the details and click on the Review + Create button. Doing this will create an instance of a Translator service.

Grabbing the key and the endpoint of the Translator service: 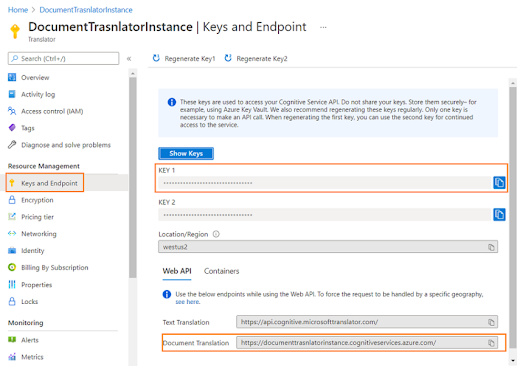 Create an instance of Azure Storage service as we need to create two containers.

Once containers are created, you could see them listed under your storage account as shown below:

Upload all the documents which need to be translated, under inputdocs container.

Similar steps need to be performed for the target container too.

Now comes the C# code, which utilizes all the information from the above steps:

On executing the above C# code, you will notice that translated files got added to translateddocs container.

In this article, we have learned how to translate any document which is placed in Azure Blob to other languages. Here is the list of all the supported languages as of today. I've also recorded this entire flow on my channel, in case if you want to have a look.

Posted by Shweta Jain at 9:40 AM No comments:

Today I'll be mentioning one of the useful functions of Azure Text Analytics - Sentiment Analysis. Azure text analytics is a cloud-based offering from Microsoft and it provides Natural Language Processing over raw text.

In this article, I will explain how to use customer-provided product reviews to understand the market insight and how one can take a call on manufacturing the products in the future. Here is the pictorial representation of this use case.

Here are the high-level steps of how we can achieve this entire flow:

This entire process starts with the data collection part and for this, I'm using a CSV file with customer-provided reviews. Here is the gist of it:

Once data is collected, we need to import the data and for that, I'm using Jupyter Notebook inside Visual Studio Code. Here is the Python code to read and extract data from CSV file: 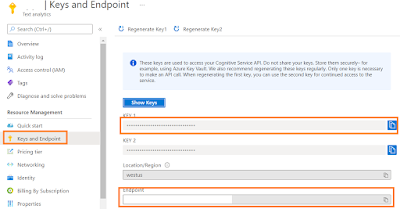 Next is to install the required Python module. In VS Code, open a new terminal and install the below module using Pip:

Import the modules and create client objects as shown below:

At this point, if you will run the code, you will get the results from sentiment analysis.

Now, it's time to plot the analysis results. This can be done by using MatplotLib. If VS Code is not detecting it, then you can install it using Pip (pip install matplotlib).

Here is the code to plot the results:

If everything went well so far, then on executing the application, you will see similar output as shown below: 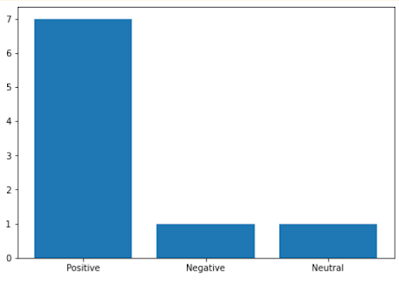 Looking at the above chart, the manufacturer can take a call and decide, whether he needs to increase the production or slow down the production and understand the customer's pain points.

Hope you enjoyed reading this article. There may be a few steps, which I didn't explain here. So, in case, if you got stuck at any point while reading this, I would recommend you to watch out for my video demonstrating end-to-end flow on my channel.

Posted by Shweta Jain at 9:56 AM No comments:

In this article, we will learn about how we can read or extract text from an image, irrespective of whether it is handwritten or printed.

In order to read the text, two things come into the picture. The first one is Computer Vision and the second one is NLP, which is short for Natural Language Processing. Computer vision helps us to read the text and then NLP is used to make sense of that identified text. In this article, I’ll mention specifically about text extraction part.

To execute this text extraction task, Computer Vision provides us with two APIs:

OCR API, works with many languages and is very well suited for relatively small text but if you have so much text in any image or say text-dominated image, then Read API is your option.

OCR API provides information in the form of Regions, Lines, and Words. The region in the given image is the area that contains the text. So, the output hierarchy would be - Region, Lines of text in each region, and then Words in each line.

Read API, works very well with an image, that is highly loaded with text. The best example of a text-dominated image is any scanned or printed document. Here output hierarchy is in the form of Pages, Lines, and Words. As this API deals with a high number of lines and words, it works asynchronously. Hence do not block our application until the whole document is read. Whereas OCR API works in a synchronous fashion.

Here is the table depicting, when to use what:

Do watch out my attached video for the demo and code walkthrough:

CodeProject
Posted by Shweta Jain at 9:53 PM No comments: