Visual Studio 2013 Release Candidate is available for download now. This release includes new tools for line of business applications, Web applications, games, mobile devices, services and of course applications targeting our latest platform Windows 8.1. With the Visual Studio 2013 Release Candidate (RC) and Windows 8.1 RTM for MSDN and TechNet subscribers, developers now have everything they need to start building and testing  the next generation applications for the Windows Platform. More...
Posted by Shweta Jain at 11:17 AM No comments:

Recently I worked on a WPF application which supports localization using LocBAML tool. I created a sample application, having a very simple UI, consist of a button inside a window. Here I am assuming that most of you are aware on how to generate satellite assemblies. So, quickly coming to the point, when I build my application, build was successful. But when I launched, my application crashed with reason stated as IOException :( 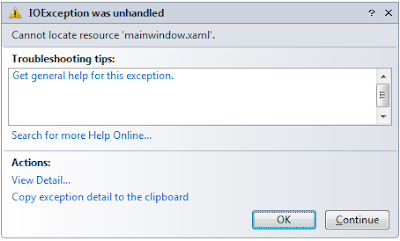 After spending almost an hour, I came to know that it was due to Culture settings. Let's have a look at my code first:

Apart from this above code, I also updated my project file (.csproj) for development language so that my satellite assembly contains the neutral language resources. Following line was added in the project file:
<UICulture>en-US</UICulture>

Apart from this, I did nothing special in my app. After hitting my head on msdn, I got an idea on why culture changes was causing an exception.

Well, no need to get panic. Solution is pretty simple. Let's move ahead and  open your assembly.info.cs file and uncomment below line:
[assembly: NeutralResourcesLanguage("en-US", UltimateResourceFallbackLocation.Satellite)]

After this minor change, we are good to go.
By uncommenting this line, we are telling runtime that culture information needs to be read from satellite assembly.

Hope, this tip will save your time :)

As a developer you may or may not need to go into the database and write queries or design tables and indexes, or help determine configuration of your SQL Server systems. But if you do, these tips should help to make that a more pain free process.

a) Since the code generated from the ORM can frequently be ad hoc, ensure that the SQL Server instance has ‘Optimize for Ad Hoc’ enabled. This will store a plan stub in memory the first time a query is passed, rather than storing a full plan. This can help with memory management.

b) Ensure your variables and parameters are the same data types as the columns. An implicit or explicit conversion can lead to table scans and slow performance.

c) You get exactly one clustered index on a table. Ensure you have it in the right place. First choice is the most frequently accessed column, which may or may not be the primary key. Second choice is a column that structures the storage in a way that helps performance. This is a must for partitioning data.

d) Performance is enhanced when indexes are placed on columns used in WHERE, JOIN, ORDER BY, GROUP, and TOP. Always test to ensure that the index does help performance.

Hope above tips were helpful :)
Posted by Shweta Jain at 11:29 AM 2 comments:

Today I'll try to write bit on TemplateBinding and how to use it inside a ControlTemplate. TemplateBinding is a type of binding used mainly for template scenarios. Here I am not going to write more on it's theoretical aspect as what is TemplateBinding, when to use, blah blah blah, as lot of content is readily available on net.  So, let's start quickly onto coding part:

First of all, let's create a new project using WPF template and place a button in it as below:

Now, what I am going to do is, I am going to replace this content template for this button. So, in order to do this, open up the Button tag and add Button.Template markup tag with a new ControlTemplate as:

Now go ahead and customize our ControlTemplate by putting Ellipse inside it as:

Now we can see that, we get a visualization for a button in form of ellipse. At this point of time, it works OK, but there are scenarios where this struct breaks down.

In above image, you will notice that button height is increased but the ellipse size is still the same, which is a bad UI design. And the reason this is happening is, inside a ControlTemplate, the height of an ellipse is hard coding. So, no matter, whatever height is set at parent (i.e. Button), it will not get inherited to child control (i.e. Ellipse).

So, now we have to fix this problem by using a special type of binding called TemplateBinding inside ControlTemplate. So, instead of hard coding the height, we will use TemplateBinding as shown below:

By setting the TargetType property of ControlTemplate, we are telling Ellipse that, any property of  Button can be set to ellipse. Now, whatever the height of button will be, it will automatically be the height of ellipse also. Isn't it interesting?

Moving forward, let's do something more interesting with Fill property of ellipse. 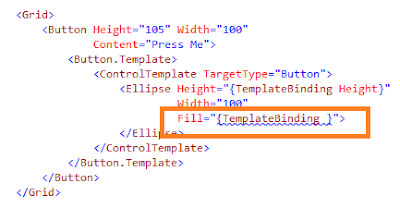 In above snippet, I am trying to set the Fill property of an ellipse using TemplateBinding. But now problem here is, a button doesn't have a Fill property. So, there is no one-to-one mapping for Fill property. Now, what to do ?

No need to worry that much because button does has a Background property as:

In above image, you might have notice that as soon as ellipse's Fill property is set to Background, ellipse becomes transparent as button's background. Now if we set button's Background property to Red, the same will be applied to ellipse too.

So, one can understand that how much magic we can do with TemplateBinding.
Now, let's work little bit on code cleanup.

So, now we can see as earlier that whatever visual property for button is set, all get applied to ellipse also.

Hope this article was useful and gave you the basic idea on how to use TemplateBinding.


CodeProject
Posted by Shweta Jain at 8:54 AM 4 comments:

This weekend, I got a chance to attend an event 'ReLive TechEd' organised by very talented folks of B.Net and Microsoft community. This event goes for close to 5 hours and gives us the glance of latest Microsoft technologies. The most effective thing was that all the sessions were given by the professionals who actually presented in Microsoft TechEd 2013. This year I missed the TechEd, but I am very happy and thankful to B.Net team, who organized it back and that is also totally free of cost :)
Posted by Shweta Jain at 6:48 AM No comments:

Hope most of you might have heard DOUGLAS MARTIN's quote:
"Questions about whether design is  necessary or affordable are quite beside the point: Design is inevitable. The alternative to good design is bad design, not no design at all."

And  VICTOR PAPANEK says:
"Design is the conscious effort to impose meaningful order"

So, if designing is that much important then one has to be very much stern about it. Going forward, today I am pointing out some design principles for Windows Phone App. So, let's gear up.


Hope above tips were useful :)
Posted by Shweta Jain at 8:34 PM No comments:

Images play a very significant role in any Windows Phone application. So, one should be very careful while dealing with images. As of now, Windows Phone supports only two image formats named JPG/JPEG and PNG. Now before concluding on which image format to choose, let's get into bit more depth of it.

PNG format images are non-lossy and need very little CPU effort to display because those are pixel perfect. But at the same time, huge PNG images take too much longer to read from storage and ultimately lead to slower display.
On the other hand, JPEG format images are lossy, smaller to store  and based on the compression level much more complicated decoding algorithm is required to display them.


Note: Resources are included in an assembly whereas content is included in deployment package.


I'll keep updating this post as and when I'll get to know about more interesting facts. I would be very happy, if you can add more on to it.

Importance of UI in performance
Simple UI tricks, such as progress bars, redirecting user's attention using animation, or placing slower loading sections at the bottom of a page or off-screen, can often ‘fix’ a performance problem without the need to tune the underlying code.
These UI tricks are an important tool to have in your performance tuning toolbox and can be much quicker and easier than addressing the underlying issue. They can act as a holdover until you have the time to devote to the core problem. So, one should never underestimate the UI while tackling performance issues.

Isn't it interesting :)
Posted by Shweta Jain at 7:07 AM No comments:

StringBuilder is NOT the answer for all string concatenation scenarios; String.Join could be

Yes, if you are in a loop and adding to a string, then a StringBuilder *could* be most appropriate. However, the overhead of spinning up a StringBuilder instance makes the following pretty dumb:


Instead, use String.Join, which is typically more performant than spinning up a StringBuilder instance for a limited number of strings. It’s my go-to concat option:


The first variable of " " can just be set to "" when you don’t want a delimiter.
For loops that do a lot of looping, sure, use a StringBuilder. But just don’t assume it’s the de facto solution in all, or even the majority of cases. My rule of thumb is to add strings together when I’ve got one to five of them (likewise with String.Format if it helps with legibility). For most other cases, I tend towards String.Join. Only when dealing with a loop that isn’t limited to about 10 iterations, especially one that really lets rip, I do spin up a StringBuilder.
Posted by Shweta Jain at 10:53 PM No comments: