In my previous posts I tried to transcribe the things that were not too obvious for me when I initially started working on Kusto Query Language. Continuing with the same thought, this time I’m going to share a few of the approaches that can be taken to aggregate the data.

Let’s consider the below input data:

Get the average number of bugs falling under each category.

There are several approaches to achieve this.

Partition operator first partitions the input data with defined criteria and then combines all the results.

Join merges the two tables based on the specified key.

Lookup operator extends the column of the second table and looks up the values in the first one.

I hope you enjoyed aggregating data.

Posted by Shweta Jain at 9:42 PM No comments:

You may have a requirement wherein you have a data stored in a column as JSON format and business need is to read that column value. Now when it comes to JSON, there are few ways, which can help us to read this data and represent that in a meaningful and readable manner. 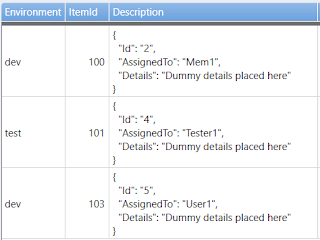 In the above table, last column named Description is holding the data which is in JSON format.

One way to extract data of description column is by using the dynamic literal as shown in below query:

On execution of above query, you will notice that all the properties of JSON are extracted in the form of new columns, as shown below:

We can further improvise the above query in terms of readability. If the column title and the JSON property are having the same name, then JSON property can be directly accessed using dot as shown below for AssignedTo:

The result of above query would also be the same as shown above.

Sometimes we do have a requirement to extract just one or two properties from JSON column. In such scenario, reading entire JSON value and converting it would be an expensive operation.

Here comes the parse_json to rescue us. Below is the sample query to achieve this:

On execution of the above query, below result can be achieved:

Let’s consider a scenario, wherein requirement is to find out the percentage of a particular type of values from the single input set.

In order to achieve the solution, one has to go through various steps as mentioned below:

So far we have got all the individual parts. The next task is to combine all the above mentioned 3 steps and generate a single result set and here comes the challenge.

Can’t we go ahead and introduce some new column just for the sake of projection? Well, let’s see how that changes our above 3 steps now:

Now comes the final step, wherein we need to bring all the above result set together to calculate the percentage.

Combining the individual results to get a single result.

On execution of the above steps, you will get the desired output as shown below:

Like most of the other programming and query languages, Kusto too has sense of case sensitivity, which means, it can deal with upper-case and lower-case while performing comparisons between values.

Get list of features, which belongs to dev environment.

As “==” stands for case sensitive comparison, above query will result in below output:

Now, to achieve this behavior there are multiple approaches.

In this approach, one can first convert the string using toupper(…) or tolower(…) functions and then perform the comparison as shown below:

In this approach, no need to call any extra function as inbuild operator will do this for us as shown below:

Here “=~” performs the for case-insensitive comparison.

Execution of both the above queries result in same output as shown below:

Posted by Shweta Jain at 9:44 PM No comments: